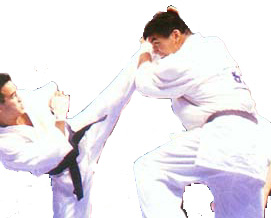 Every 4 years, exponents from all parts of the world get together in Japan to fight the best fighters in the world. There are no weight categories in this tournament, no racial categories, no continental categories. The only distinction and class is that of sheer will power and hard training. The difference on weight, high and techniques skills sometimes are compensate by the the fighters using the spirit of "Akiramenai" concept Japanese that mean "Never give up". This is an spectacular tournament, which captivate the hearts of the initiated and the experts. Around 500 participants from different countries around the world fight for the glory and honor of being the best fighter in the world.

The World tournament is an ultimate test of stamina and skill, with the emerging champion having to battle at least 8 opponents and break up to 10 wooden boards or roofing tiles in this 3 days, knockout style contest. For the first 3 times this world tournament was organized, the top eight fighters in the world were almost always Japanese, who spared no effort in making sure their fighters were of the highest caliber and capability. It was only until the 4th World Open Championships that exponents from Europe y Australia began to make serious challenges for the top honors, and the European challengers lost only marginally to Akiyoshi Matsui in the 4th world Open Championship Grand finals.
The competitions are always staged in a knockout basis, where the competitor is disqualified from further competition when he loses a single match. There are no size or weight categories in the World Championship which means that a competitor of less than 1.5 meters can easily meet an opponent of more than 2 meters. 4 side judges and a main judge form the panel of judge for each match. Should any fighter be overwhelmed by his opponent, then the match is stopped immediately. Otherwise, 1 round of 3 minutes is fought after which the judges decide the winner. Should a draw be decided, 1 more round of 2 minutes is fought. If this second round, also end in a draw, then one last round of 2 minutes is fought, after which the judges will make a decision based on weight and Tamashiwari results. As a rule, fighters are required to break at least 1 board or roofing tile before proceeding onto further stages of competition each time. Their abilities here may be deciding factors in the event of prolonged draws.
body padding and protective gear are strictly prohibited in these fights other than groin guards and any necessary bandages as prescribed by the attending doctor.Contestants are tested on their stamina and will-power as they exchange full body blows with their opponents. As a rule , no hand techniques are allowed to parts of the body above the shoulders, for example, a shuto is not allowed to the neck or face. Kicks to the groin areas are also strictly prohibited and any may result in the disqualification of the incumbent competitor. Head buttes and throws, as well as gi pulling are also prohibited. Apart from these restrictions, all other techniques are applicable and allowed.
Below you will found the result of the World Open Tournaments until 1991. On 1995 a year
after the death of Sosai Masutatsu Oyama, the 6th tournament was realized, however this time because of the split of the International Kyokushin Organization two tournaments were held for this 6th World Open Tournaments (1995).

GO BACK TO WINNIPEG KYOKUSHIN KARATE